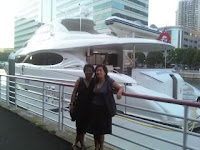 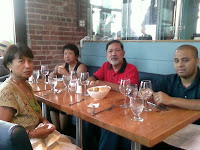 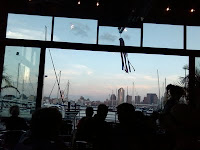 Not too sure what's so happy about celebrating a one-year death anniversary. I suppose it's the actual honoring a loved one's memory & celebrating his life. Mom preferred a quiet acknowledgment this year as opposed to the traditional Filipino let's-invite-everyone-over kind of gathering. So we went to Mass at Our Lady of Mercy (Jersey City) and then had dinner at a new restaurant downtown by the Newport Marina. Michael Anthony's hasn't even officially opened quite yet. The grand opening is in a few weeks, sometime next month. We toasted to Dad's memory and shared a few stories. Just Auntie, Uncle, Mom, A. & me. And cousin K., T., M. & E. had their own memorial celebration in GA -- complete with sushi fiesta, Dad's old Perry Como CDs, mini-golf & karaoke!
Next year, I think I'd like to organize an intimate tennis or golf fundraising event in Dad's honor and donate the proceeds to the Prostate Cancer Foundation. I'd thought about doing that this year, but it was too soon for me. More likely a tennis event? . . . since I'm finally learning how to play the game and can appreciate the technique behind the strokes . . . what with my tennis lessons & all. Dad would be so proud.
Sadly, Mom will be leaving for Seattle in the morning to attend a cousin's funeral. She committed suicide . . . hung herself and has left behind four children. She'd just been released from a week-long stay in the hospital for severe depression. Heartful thoughts & prayers go out to the Aichele Family, especially A.'s kids.
Strange how & when life throws some unthinkable situations out at you. After a full year, as I move from grieving my Dad's death to celebrating his memory, I'm forced to think about my cousin's children who will now begin their mourning journey and have to figure out how to make sense of their mother's death . . . which seems so incomprehensible. What's hopefully comforting is that Dad will be there to greet my cousin, A., with open arms & hopefully she will finally be . . . at peace.
As for me, it feels good . . . a year later . . . to be at peace. No doubt Dad's okay with that.
Posted by SLC at 23:23

She sits in the Center
of Life's web
in a matrix of Connectedness
She waits and prays
for Balance
in her Self
in the Presence of day-to-day
Charlotte speaks to me
at the bus stop.
Posted by SLC at 12:24

Dad's one-year death anniversary is approaching. It's been quite a year of transition. Most recently, A. & I have been doing the things Dad enjoyed doing -- tennis, golf, hanging by the water and spending time with good friends. And every so often, a glass of wine too. Just as Dad did. That's all we can do - to honor his memory.

As A. & I commuted down the NJ Turnpike this morning, we passed the grand opening of The Barclays Golf Course at Liberty State Park. How Dad looked forward to a professional golf course in his backyard though he probably wouldn't have afforded the $1million membership fee. Golf's greats such as Tiger Woods and Phil Mickelson are expected to participate in the exhibition. As we exited, the sun's rays reached out to all of the cars congested right before Exit 14A as we were on our way downtown (JC).

The sight of the sun's rays through the clouds was simply glorious. And in that moment, I was reminded of the peace of the Spirit's Amazing Grace which has supported me in my grief journey. Everything seems to ring true -- what others say about losing a loved one, especially a parent. You just never really get over it. Sure, it gets better, but there are also moments when it was just yesterday that we waited patiently and lovingly for Dad to pass and no longer be in pain. And with my arms outstretched above my head, I gaze up and hold my own heart.
As Life glides along our hearts' memories, I know Dad would be excited that we have moved forward in our adoption process. In fact, he'd said - What are you waiting for? I'll help you finance the adoption process. And gratefully . . . he (& Mom) is. Thanks, Dad, for always being so supportive.
Posted by SLC at 09:35 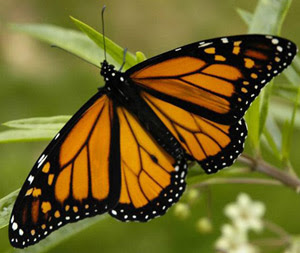 A. gave me tennis couples' tennis lessons for my birthday last year. It's been the gift that keeps on giving. Ironically enough, I didn't enjoy tennis leessons much when as a 10-year-old, Dad tried desperately to get me interested in the sport (and turn me into a boy, or so I thought) by making me wake up weekends at 6am to hit an hour on the wall, then head to the Lincoln Park courts for another hour or so. Growing up, I wasn't much of an athlete as I was more attracted to writing, books & musicals.

Much to my surprise, I've been enjoying tennis and can now understand the mechanics behind the strokes and actually appreciate the game. Yesterday morning as A., P. & I played on the Sayreville courts, an hour into our rally, an unusually large butterfly started chasing me and wouldn't fly away! Immediately I thought, It's Dad, it's Dad!

Even more unusual was the fact that we haven't seen any butterflies at all this summer what with the heat & humidity. Guess it was Dad's way of saying how glad he is that I've finally taken up the sport!
Posted by SLC at 10:34

Happy birthday to me! 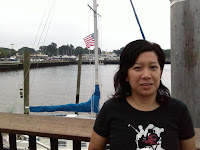 A most blessed birthday
09 August 2009
thank you for my husband's care,
A. who overwhelme me with loving surprises
and gifts that keep on giving.
thank you for my mother's generous nature,
Mom whose maternal ways have become friendly,
She, who has always been my ally.
thank you for my cousin's compassion,
K. who is my sister and emotions' secret keeper.
[i missed you this birthday, Dad. thanks so much to you & Mom
for providing me with a wonderful Life.
Here are some photos from the weekend.]
Posted by SLC at 08:55 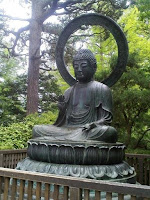 I find myself overwhelmed this August. Not so much that it's my birthday month, but moreso because it's the month of my Dad's one year death annviversary. Mom wants an intimate family acknowledgement, whereas I would love to see some of my Dad's buddies. But I defer to my Mom because it is she who was Dad's primary caregiver his last two years. It is Mom who lives in the home where she & Dad made their life together. It is Mom who still lives among Dad's presence -- his clothes, his computer, his papers -- which we still have yet to do anything. (I patiently wait for Mom to let me know that she's ready to donate Dad's things, & I dread the day that we'll have to go through it all.) I realize, Mom & I each have our individual grieving experiences with Dad's passing just as we each had our own relationship with him.

I ruined A.'s birthday surprise for me. Given that we'd spent last August in the hospital with Dad, A. planned to fly my cousin, K., in from GA to surprise me. Only I found out a couple of weeks early because I decided to check A.'s blackberry -- something I'd never been accustomed to doing! As my 14-year-old niece thankfully pointed out, at least I was surprised in that moment. While I am certain Dad would want me to enjoy my birthday month, I cannot help but feel deep sadness that he's not around for my birthday, & he never will be. I really miss my Dad. As much as I would like, not even the news of a newborn baby in the family makes the sting of Dad's death a little less painful. Of course, I know he is always in my heart's memory. But his physically not being with us really does bite more days than others. And it's those hard days, I try to laugh at Dad's most character moments. Like when we were about to trek out one time, and he said he would drive. I sat in the front passenger's side, and Mom sat in the back. But what did he do? He got in the other back seat, and then no one was in the driver's seat!

What I need to do is . . . not focus on the rush of tears, but the rush of sunbeams that graciously embrace me in Dad's loving presence.
Posted by SLC at 17:47

As I was walking on 23rd Street to the PATH train after work, an elderly blind woman -- no dog, no cane -- strolled in the opposite direction, and she was simply enjoying her chocolate hardshell, vanilla ice cream cone. She & I happened to be passing the blind school where I usually bump into folks and their seeing dogs either taking a break from their activities or waiting to board a commuter van. For the next five minutes, I thoughtfully focused on how delightful that ice cream cone was for that woman. And I . . . delighted in the fact that we crossed paths. Thank you, Buddha Lady, for reminding me about the joys of taking to the pavement mindfully and indulging in simple pleasures too!
Posted by SLC at 23:00 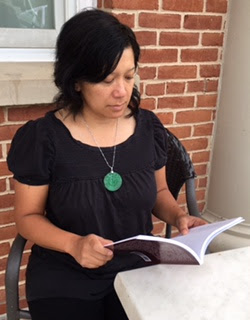